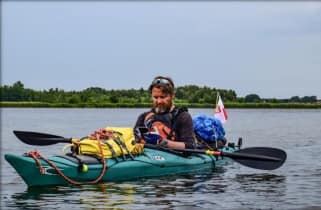 This page is the result of mine many years of passion. Thanks, unfortunately to the late uncle Michal - which encouraged me then a teenager, to that - since 1993 I do kayaking. After spending nearly 250 days and nights on the water, I have travelled nearly four thousand kilometres during almost eighty canoeing trips on 36 rivers of Poland, Lithuania and Finland and about 300 nautical miles along the shores of the Baltic Sea, the ocean Atlantic as the Arctic Ocean.
The latter, seemingly obvious, since I live by the Baltic Sea, has happened only in July 2017, when I immersed the oars and the hull of my "ship" in ... the Sea Barents. In the northernmost inhabited settlement the tiny fishing village of Skarsvåg, a few km east of the North Cape (Nord Capp). After a few hours in the waters of the Arctic, I immediately swallowed the catch of this "niche in niche ”, which in our country is sea kayaking.

Following the blow, in September 2017 I started the implementation planned for several years the idea of a canoe trip along the entire Polish coast, POLSKI BRZEG. From the New Pasleka on the Vistula Lagoon to the Nowe Warpno on the Szczecin Lagoon. About 350-380 nautical miles (650-700 km). Currently, I have reached about half of the project.

In the meantime, there were also Finnish Allands, Norwegian Lofoten Islands and Dolna Odra with The Szczecin Lagoon. I have travelled with my friend, Piotr Kozlowski, the most persistent canoeing companion, also present here on the website. From time to time, join me or us, on the rivers Mirek, Cyprian, Adam, Mikołaj. I also like the lonely dimension of my sea adventures, that happens, at least quite often.

I have been using the PRIJON TOURYAK for several years. Although, this is not typical equipment sea, it works perfectly, being stable, fast and very packable. Perfect for expeditions, from small rivers to sea waves.

Canoeing - apart from my other interests - is my springboard, an escape from everyday life stressful work in a specific profession of a prosecutor. It is also the realization of my childhood, unfulfilled dream to become a sailor.

This blog was created primarily to showcase photographs of beautiful sights from a rare perspective of a barely above water kayak and to please the eye of all those who do they love the sea and for some reason they ended up here. Maybe it will inspire someone to going the same way.